Before we moved to Santa Barbara, we had never heard of Tri-tip.

Larry Viegas, a butcher at a Santa Maria Safeway store in the late 1950s, says that the idea to cook this as a distinct cut of beef first occurred to his store manager, Bob Schutz, when an excess of hamburger existed in the store (into which this part of the animal were usually ground). Viegas says that that day, Schultz took a piece of the unwanted meat, seasoned it with salt, pepper, and garlic salt, and placed it on a rotisserie for 45 minutes or an hour; the result was well-received, and Schultz began quietly marketing it as “tri-tip”. 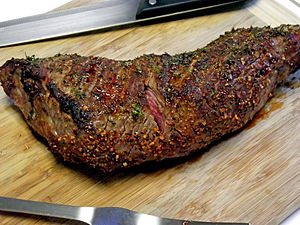 It became a local specialty in Santa Maria in the late 1950s. Today, it is seasoned with salt, pepper, fresh garlic, and other seasonings, grilled directly over red oak wood to medium-rare doneness. Alternative preparations include roasting whole on a rotisserie, smoking in a pit, baking in an oven, grilling, or braising in a Dutch oven after searing on a grill. After cooking, the meat is normally sliced across the grain before serving.“

Sometimes labeled “Santa Maria steak”, the roast is quite popular in the Central Valley regions and the Central Coast of California.[8] It has begun to enjoy increasing favor elsewhere, as well, for its full flavor, lower fat content, and comparatively lower cost. Along with top sirloin, tri-tip is considered central to Santa Maria-style barbecue. In central California, the fat is left on the outside of the cut to enhance flavor when grilling, while butchers elsewhere trim the fat side for aesthetic purposes.

We bought a tri-tip yesterday and I made up a “Santa Maria-style” Marinade. It was just like the tri-tip we used to get at Pappy’s in Santa Maria. We served it with roasted fingerling potatoes and braised Brussels sprouts.

View all posts by Jim Kirkley

Meet us at the crossroads!

Join us on our journey as we move into the next phase of our lives: a crossing of food, travel, and lifestyle as viewed from our unique perspective as former high-tech executives, retail specialty food owners and enthusiastic cooks and travelers.